When buying a hamster from the store or elsewhere, people often buy “just a hamster” without any thought to the breed that they are purchasing. It is not until later that they try to discern whether their hamster is a Syrian, a Siberian, or another type of dwarf hamster. We’ve compiled this handy guide to help you figure out exactly which type of hamster you have decided to add to your family.

In this article, we will break down for you the information that you need to know when determining the breed of your hamster. We will also be addressing other concerns, such as backyard hamster breeding and the matter of purebred hamsters. We’ve got a lot to talk about, so let’s dive in! 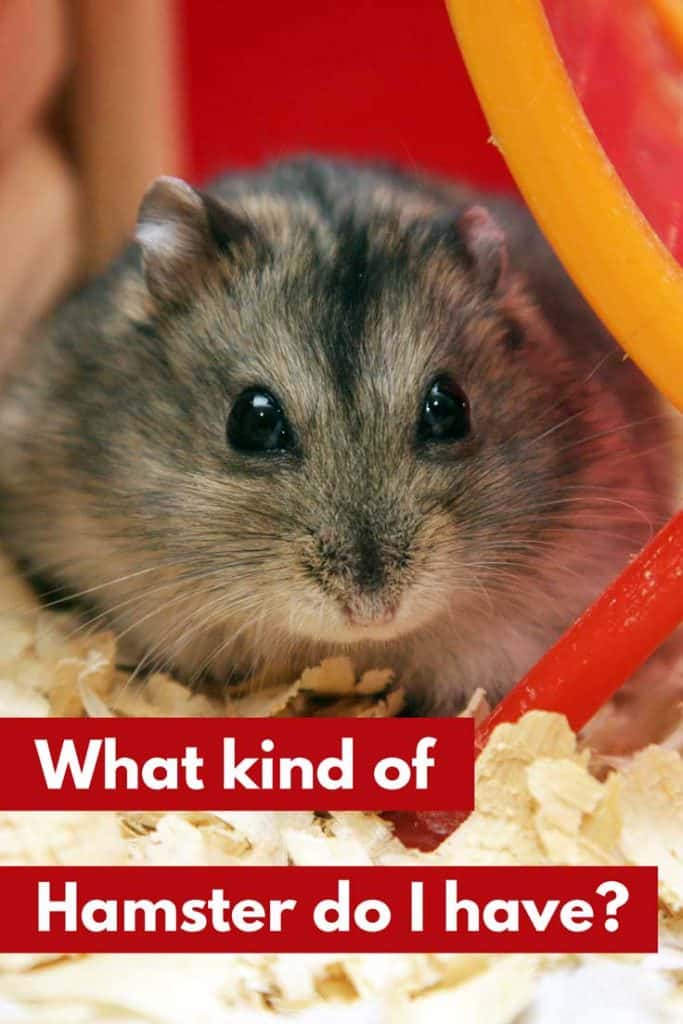 Easily the most identifiable type of hamster is the Syrian hamster. Also known as the “teddy bear hamster” or the “golden hamster,” this breed measures in at around five and a half inches in length, with females growing slightly larger than the males. 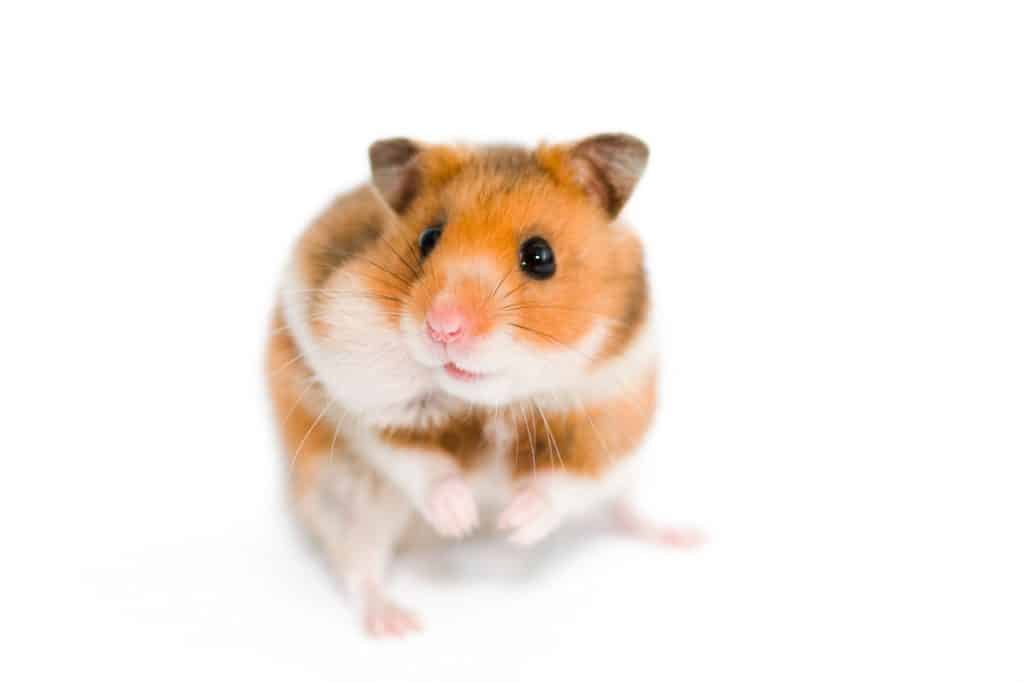 Though this breed is known for its typically golden coloration, Syrians have been bred to possess a wide array of fur colors and patterns. Standard photographs of Syrian hamsters often depict the long-haired, golden-colored hamster. However, your hamster may be short or long-haired, with a coloration ranging from beige to blond to gray.

Click to read our ultimate guide to hamster breeds, which details the wide variety of colors that Syrian and dwarf hamsters can be.

Many people mistakenly believe that “dwarf hamster” refers to one breed, leading them to consider all smaller hamsters to be a part of the same classification. But there are four different breeds of common dwarf hamsters, with each having their own unique and interesting traits. 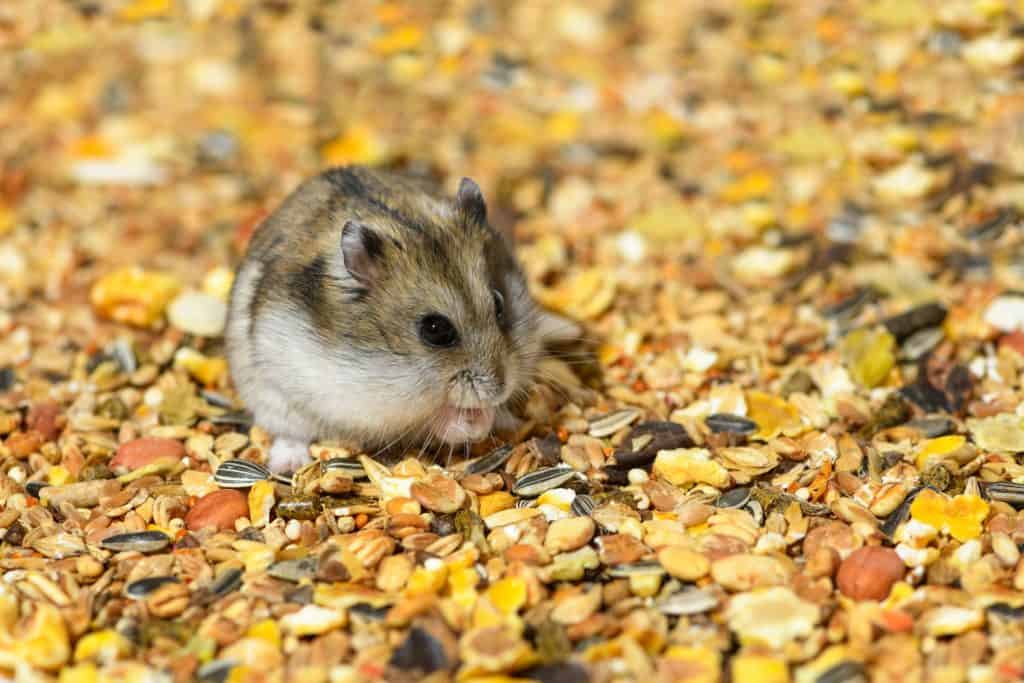 While still considered a dwarf hamster, Chinese hamsters possess traits that set them apart. Perhaps one of the most intriguing things about them is that they can coexist peacefully with each other, a trait that most other hamsters (especially Syrians) do not possess.

Chinese hamsters have longer, more slender bodies than Winter Whites and Campbell hamsters. Their head isn’t set into their bodies like these other dwarf hamsters but instead articulates on a short but visible neck. By the time they reach maturity, the average Chinese hammy will be around four inches in length with a tail that measures around 2 centimeters long.

These hamsters may have dark brown, black and gray coloring with a black dorsal stripe that runs all the way down their backs. They may also be white in color with colored patches all over their bodies.

Winter Whites originate from snow-covered Siberia, so their name is a nod to the white, wintry setting in which they live in the wild. One of the most interesting traits of the Winter White hamster is its ability to change its fur colors when the seasons change. They grow to be no more than four inches in length and have stocky, sturdy little bodies much like the Campbell hamster.

Though their name suggests that these hamsters are all-white, they can be bred with a number of different colorations. It is not uncommon for Winter White hamsters to have portions of fur that are dark brown, black, white and even blue in color.

These hamsters are also notoriously chatty, particularly when they are frightened or startled.

The Russian Campbell hamster is a broad and stocky hamster with a tail and legs that can be difficult to see at a glance. Their fur is short and dense, including the fur that appears on their elusive little feet. A Campbell hamster can be pure white with pink eyes (albino), white with black eyes, orange or multi-toned in coloration with a darker dorsal stripe.

These hamsters are commonly mistaken for Winter White hamsters, as their bodies are very similar in structure and shape.

A mature Roborovski hamster grows to be no longer than two inches in length, making them the smallest dwarf hamster. Like Chinese hamsters, they can get along peacefully when put in the same enclosure together. In fact, it is often advised that if you have a Roborovski hamster, you should get it a companion of the same breed to share a space with. They typically thrive in pairs.

Most commonly, Roborovski hamsters have a light brown coloration that may be accented with a darker brown on the tops of their heads and on their backs. Unlike other breeds of domestic hamsters, these hamsters do not come in a wide assortment of different colors.

What to Do Once You’ve Identified Your Breed of Hamster 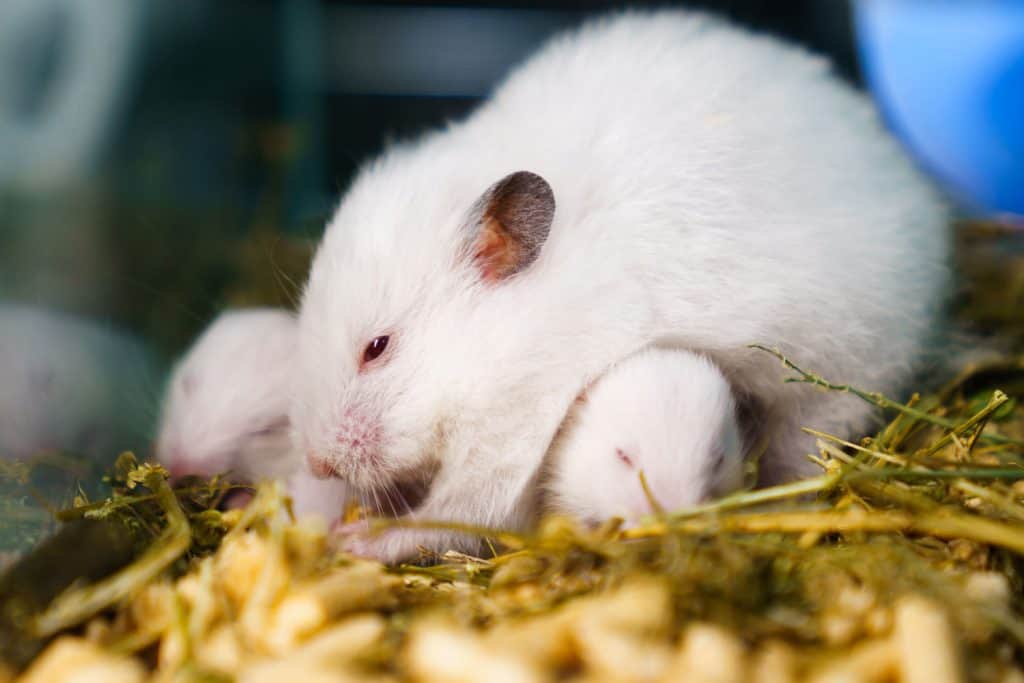 If your hamster is the larger Syrian hamster, make sure that they have their own space. They are creatures who prefer to live alone and can become very territorial, very quickly.

One or more Chinese hamsters may be able to be kept together, but it is advisable to monitor their behavior as they get used to each other. Most Chinese hamsters won’t give you an issue if their shared space is large enough, but some do prefer to live by themselves instead of in pairs or groups.

Roborovski hamsters, on the other hand, should be kept with a companion. Winter Whites will also often thrive best in pairs.

Of course, this is only a rough guideline to housing hamsters of the same breed together. You should gauge your hamsters’ reactions to each other and keep them together or separate as the situation and their personalities call for.

Read more about the best cages for dwarf hamsters here.

Is My Hamster Purebred?

While purebred or pedigree hamsters certainly exist, unless you go to a breeder it is unlikely that your hamster is one of them. Most hamsters that you will find in the pet store, on Craigslist or any other seller are hybrid hamsters. This is especially true of dwarf hamsters. 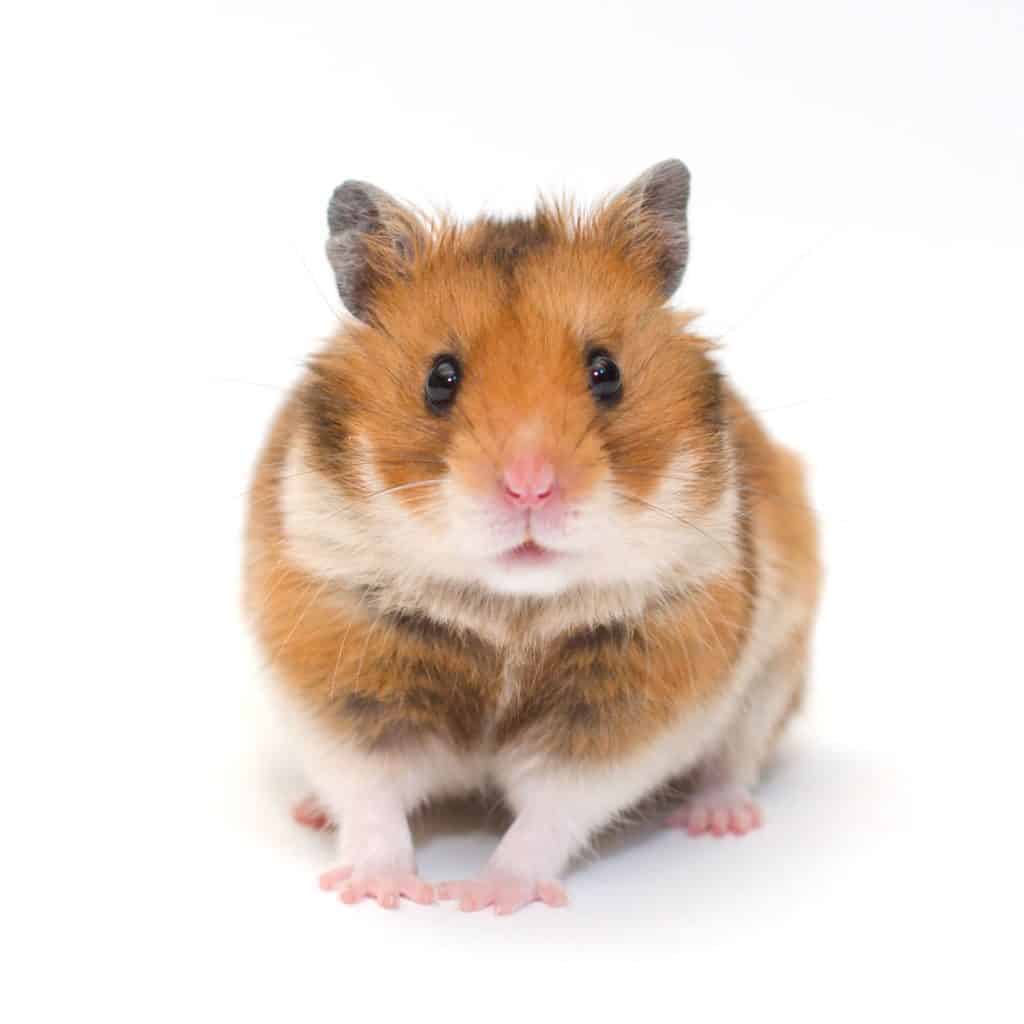 Winter White and Campbell hamsters can inter-breed, leading to largely infertile spawn that may be marketed as one or the other in the pet shop. Many shop staff don’t know the key differences between the two breeds and may house them together. Considering how challenging it can be to sex a dwarf hamster, they may also house males with females.

And that’s how you get hybrid hamsters.

The only way to ensure that you are getting a purebred, or “pedigree” hamster is to adopt one from a showing breeder that specializes in the matter.

Do not trust the Craigslist seller’s or pet shop staff’s best judgment when they say that their hammies are purebred. They often have no idea what this means and will say anything to make a sale.

How Soon Can You Identify Your Hamster’s Sex? 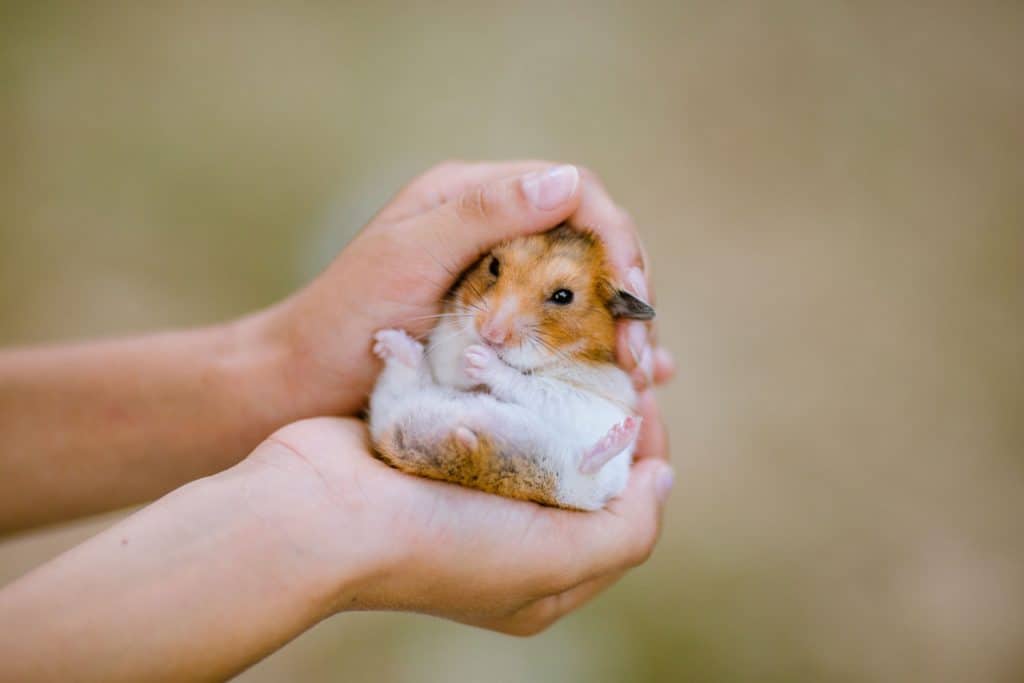 In two months or less, a hamster can start reproducing. These animals grow up quickly and make babies even quicker, so it’s best to sex your hamsters as soon as they can be safely weaned from their mothers. This occurs when the hamsters are around four weeks of age. You should try to sex your hamsters immediately after weaning to avoid any reproductive mishaps.

The easiest and most reliable way of determining sex in baby hamsters of all breeds is to look at the distance between the animal’s anus and their genital opening. This is called the “anogenital distance” and is markedly different between males and females of all hamster species.

Both male and female hamster pups have two openings that you can see on their underbellies: the anus and their genital opening.

Why is it a Bad Idea to Breed Hamsters?

Sometimes, a female hamster becomes pregnant through no real fault of their owner. They may have accidentally mis-sexed their pet before pairing them with a member of the opposite sex, resulting in pregnancy. They may have even adopted a pregnant hamster from the store, where they mated with an improperly placed male. Accidents happen and it’s important that you provide adequate care for a hamster that’s pregnant.

However, you should never consciously attempt to breed any of your hamsters with any other hammy. The breeding of hamsters, or any other animal really, requires a tremendous amount of dedication and education that backyard breeders just don’t possess.

Common problems that arise from the backyard breeding of hamsters include:

Know Your Breeds and House Them Appropriately

It is never a bad idea to know the breed of your particular hamster(s). It’s handy information to have, especially if you are wondering how to house more than one hamster pet. Take the above information into account as you navigate this decision.

Syrian hamsters are easy to identify due to their size in comparison to dwarf hamsters. This is great news since these hamsters absolutely should not be housed with any others, not even other Syrians.

Dwarf hamsters may be housed together, though Chinese hamsters may give you greater trouble and may prefer to live alone. Roborovski and Winter Whites, on the other hand, are more likely to coexist peacefully.

If you are housing any two hamsters together, make sure to check their sex and ensure that you are not putting males with females. Backyard breeding of hamsters, even when it happens on accident, can lead to a host of health problems for mom and babies.

Now that you know what to look for, you can confidently determine which type of hamster you’ve brought home. For even more information, check out our guide about the various hamster breeds out there.

And if you're only just wondering which hamster to get, you may be interested in reading these -

Where Can I Get a Hamster

How Much Does a Hamster Cost? (Including Care Costs) 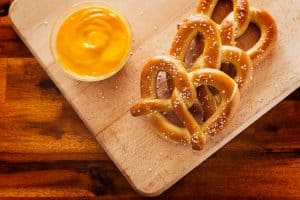 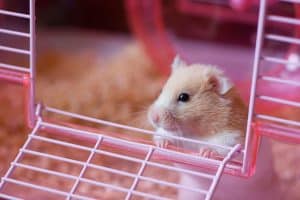