As a woman who has a menstrual cycle or period each month, you may wonder if your hamster goes through the same. After all, they’re a mammal, too, right? If you want to know the answer to this question, whether for personal or breeding reasons, we’ve done an extensive research to provide you with more information. 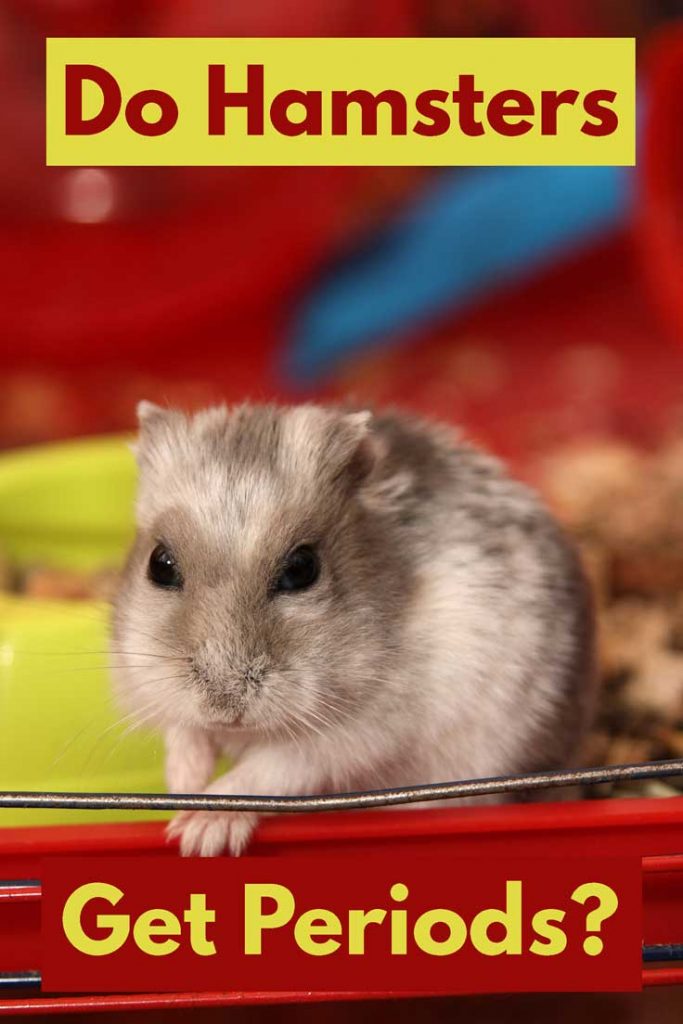 Hamsters do not get their periods, aka menstruate. Instead, they have an estrus cycle. Monthly, this will occur seven times. Instead of blood, hamsters will release a discharge that’s white in color.

Perhaps you’ve seen estrus discharge before and you’ve always been curious about what it is. If you want to get to know your female hamster a little bit better, then read on. We’ll delve into the estrus cycle, sexual maturity, and pregnancy in female hamsters.

What Is the Estrus Cycle?

The estrus cycle is something all female hamsters experience once they reach sexual maturity (more on this later). Unlike the human menstrual cycle, which repeats every month, a hamster’s estrus cycle occurs far more often, seven times monthly. On a four-day basis, you can expect your hamster to begin estrus.

You can tell your hamster is going through their estrus cycle by reviewing their secretions. They will release discharge from their vagina that’s slightly white in color. When it does occur, the estrus cycle goes on for about 12 hours. It will begin during the night when your hamster is awake and most active.

Essentially, what your hamster is signaling when their estrus cycle starts is that they’d be open to mate. This is pretty much the hamster version of “going into heat.” If there are male hamsters around, then sex could occur and your hamster could get pregnant.

Like human women who go through menopause and then stop having their periods, later in their lives, female hamsters will no longer have an estrus cycle. That’s because they’ll be too old to get pregnant.

Read more: How to Sex Hamsters

The estrus cycle is important for breeders because it’s the only time that female hamsters will be receptive to males. If they’re not in heat, then your female hammy may behave aggressively towards other males.

If you’re not a professional hamster breeder, then there’s no need to worry about the estrus cycle much. There shouldn’t be overt behavioral changes, although it is proven that females prefer the odor of male hamsters more during estrus.

Please do not breed pets irresponsibly!

This is a good time to mention again that you should not be breeding hamsters unless you’re an experienced ethical breeder who works with documented pedigreed lines of hamsters.

If you want to venture into the world of hamster breeding and showing, it’s best to start by going to a few hamster/pet shows, where you’ll be able to meet local ethical breeders in your area and get to know them. You’ll be able to buy your first pedigreed hamsters from them and have them as your mentor. And you’ll need a good mentor because breeding hamsters the right way is far from simple!

And remember, hamsters are solitary animals. Never keep two Syrian hamsters in the same cage or tank, and avoid introducing two dwarf hamsters into the same tank. The correct way to have two or more dwarf hamsters living together is by adopting two littermates of the same sex.

Do Female Hamsters Bleed During Estrus?

Since the estrus cycle is marked by discharge and not blood, what do you do if your hamster is bleeding vaginally? If they are in heat and you see a speck of blood, there’s no need to panic. Although not very common, a little blood can be released during the estrus cycle.

The emphasis here is that there shouldn’t be a significant amount of blood. If you see more than two drops, then something is wrong. The same is true if you see any blood in or around your hamster’s anus. Prolonged bleeding of the vagina or anus should be addressed by a veterinarian, as it’s often indicative of a more serious problem.

When Are Female Hamsters Sexually Mature?

Female hamsters don’t go into heat until they reach a certain age. It’s then that they’re sexually mature, which means they could carry a pregnancy to term. Since hamster lifespans are just a few years, females become sexually mature earlier than you may have expected. It’s generally within the first six or seven weeks of her life that your female hamster is ready to mate.

Depending on the species, sexual maturity may come early or even be delayed somewhat. Syrian hamsters become sexually mature at the 45-day mark, which is closer to seven weeks. With Campbell’s dwarf hamsters, though, it varies on their environment. If the female hamster grew up with males, then she reaches sexual maturity quickly. If she’s in an environment with only females or even alone, then it can take longer for her to become sexually mature.

It’s recommended that hamsters become pregnant within 10 weeks of their life. They’re at their healthiest and thus can have a successful pregnancy at this point. They can also get pregnant and give birth successfully if they’re 15 weeks old, but don’t push it too much further.

Hamster pregnancies are incredibly brief. Dependent on the type of hamster you have, they might give birth less than 3 weeks after mating. It’s safe to say if your hamster had contact with a male more than 30 days ago, then your pet is not pregnant. Take a look at some approximate gestation periods for different species of hamsters:

As you can see, hamsters don’t stay pregnant for long!

How Do You Know Your Hamster Is Pregnant?

If you acquired a female that had spent time with a male hamster in the same enclosure, then it’s likely the two animals have mated. Rather than just guessing if your hamster is pregnant, there is a way to check.

If you also notice a white discharge from your hamster that’s thick in consistency and persists over five days, then successful pregnancy occurred.

In about 10 days (sometimes 18 days), the hamster’s belly will begin looking bigger. From there, her gestation period may be 16 days on the shorter end and 22 days on the longer end. Species will determine the length of gestation.

Another instance in which you might see blood from your female hamster is right before birth. Again, if this is just a drop or two, then there’s no need for concern. If it’s more than that, then your pet needs veterinary attention.

Each time a hamster gives birth, she may have six or eight babies. Her behavior sometimes changes right before birth. She might have excess energy or even slight aggressiveness.

A Note on Breeding

While this whole article has been about the female hamster reproductive cycle and pregnancy, we do not advise you to breed your female hamsters. Doing so is not a job for just anyone. You must have a lot of knowledge about female hamsters, their estrus cycles, pregnancy, and birthing. You must also be able to recognize any signs of a more serious health issue for the survival of your hamster.

Being responsible for up to eight hamsters at once is a major job, especially if you’ve never done it before. You might think it’s a good idea to breed your female hamster so you can sell or give the pups away, but this is irresponsible and frankly, selfish.

There are already plenty of hamsters in the world that need furr-ever homes. Adding more hamsters to the population makes it more unlikely that they’ll all find homes. If you yourself are itching for a new hamster, then adopt. Don’t make your hamster breed.

Leave hamster breeding to the trusted, reputable breeders. A hamstery is staffed with professionals who have years of experience with hamster pregnancy and birth. They know what they’re doing.

If you’re still not convinced, think of your wallet. Each month, you may spend up to $150 on hamster care according to Investopedia. If you multiply that times six or eight, that’s between $900 and $1,200 a month. That’s excluding the cost of the momma herself. Your pregnant hamster might require special care, like extra vet trips, meaning you’re spending even more money on her, too.

Read more: How to Take Care of Baby Hamsters

Hamsters don’t have traditional menstrual cycles. Instead, they go through an estrus cycle, which indicates they’re ready to reproduce with a male. You can tell your female hamster is in heat by the discharge she releases.

Keeping your female hamster away from males while she’s going through her estrus cycle is the best course of action. Breeding hamsters is a difficult, exhaustive job that requires a lot of knowledge and responsibility. It’s also very expensive to care for baby hamsters. Leave it to the pros and adopt if you want a new hamster. You’ll be glad you did!

How Big Do Hamsters Get? (These numbers may surprise you!)

What is a Teddy Bear Hamster?