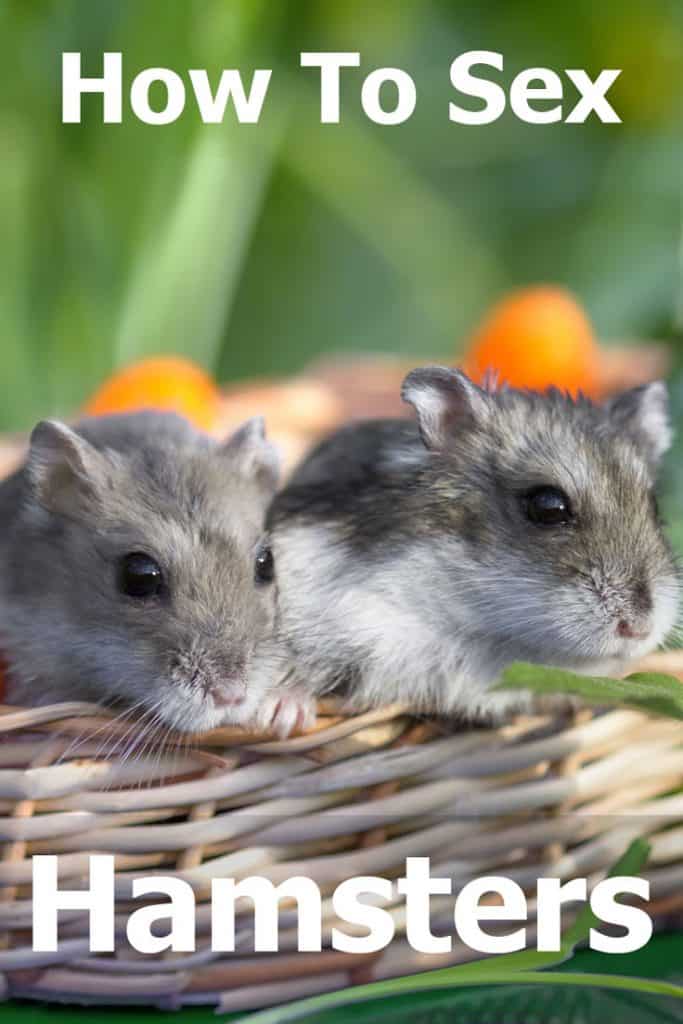 In order to sex a baby hamster, what you need to look for is the distance between the hamster’s genitalia and their anus. Sexing adult hamsters is significantly easier due to the apparent presence of testicles on males.

Sex determination in hamsters requires a keen eye and a bit of patience, especially when you’re trying to sex baby hamsters. Different breeds may require a slightly different approach, but generally speaking, sexing hamsters is the same across the board.

Determining the sexes of your hamsters is critical because a lot of problems can arise from housing two adult hamsters of the opposite sex together – most notably, out-of-control breeding. At what age can you determine sex? What should be done once you know the sex of a hamster? How can hamster owners minimize the risks of their hamsters procreating like crazy? Continue reading to learn all of this and more.

How Soon Can You Identify a Hamster’s Sex?

In two months or less, a hamster can start reproducing. These animals grow up quickly and make babies even quicker, so it’s best to sex your hamsters as soon as they can be safely weaned from their mothers. This occurs when the hamsters are around four weeks of age. You should try to sex your hamsters immediately after weaning as to avoid any reproductive mishaps.

The easiest and most reliable way of determining sex in baby hamsters of all breeds is to look at the distance between the animal’s anus and their genital opening. This is called the “anogenital distance” and is markedly different between males and females of all hamster species.

Both male and female hamster pups have two openings that you can see on their underbellies: the anus and their genital opening.

A Step-by-Step for Sexing Baby Hamsters 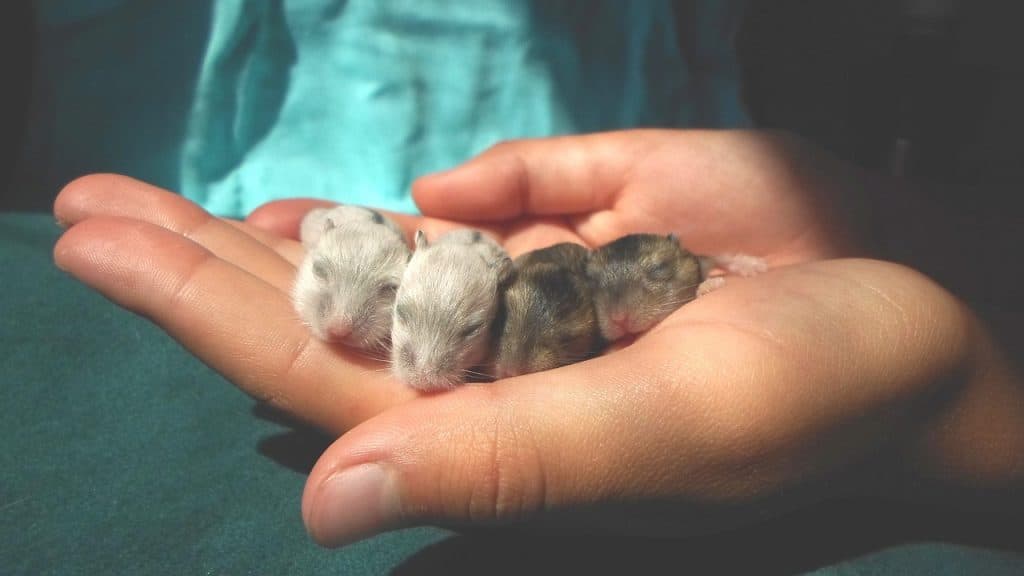 Unfortunately, baby hamsters are incredibly small and very wiggly, so it’s often not as easy as just flipping the pup over and checking out their belly. Baby hamsters will do everything they can to become upright again when you turn them over, including biting, scratching and even screeching. This is a natural impulse that the hamster will revert to because the act of being put on its back is indicative of danger in nature. Still, it needs to be done.

To make the process a bit easier on yourself and to minimize the stress on your hamster, consider these steps for sexing your pup:

You might have to check and re-check a few times just to feel confident about the sex determination that you have made. This method is ideal for baby hamsters, who are prone to becoming stressed out and should be handled with the gentlest care.

The presence or absence of testicles is a pretty solid method of identifying the sex of an adult hamster of any breed. Simply cup the hamster’s back and turn them over so that you can see their belly. If you put your hamster into an upright sitting position, you should be able to identify a pair of testicles if the hamster has them. Sometimes, the testicles are obvious enough to be seen at a glance, but dwarf hamsters might require a closer look.

Other Sex Traits in Syrian Hamsters

Syrian hamsters, the largest of the household hamster breeds, can be the easiest to sex due to their size. They also have different sex characteristics that you should keep in mind, especially if you’re not confident in your initial sex determination.

Female Syrian hamsters have pretty prominent nipples that appear in two rows down the belly. Males have very obvious testicles where this breed is concerned, though they can be tougher to find if the hamster has long fur on their belly.

Other Sex Traits in Dwarf Hamsters

One of the unique traits of dwarf hamsters is the presence of a scent gland located around the middle of their belly. The secretions of the scent gland can be yellow in color and oily in texture, especially among male dwarf hamsters. Females have the same scent gland, but typically there is little to no evidence of secretion, so it is much harder to identify at a glance or touch.

General Sex Traits to Help You Sex Any Hamster

There are three physical differences that you can typically expect to see between males and females of all household hamster breeds.

Use these sex characteristics to help you most accurately determine the sex of your Syrian, dwarf or Chinese hamster.

What to do Once You Know the Sexes of Your Hamsters

Among the first things that you should do when you have determined the sexes of your hamsters is to give some serious thought to the hamsters’ living situation.

It is never advisable to put two hamsters of the opposite sex together. Keeping opposite-sex hamsters together past the four or five-week mark is almost guaranteed to get you a lot of hamster pups. This is not a good thing. Separate enclosures are required to eliminate this risk.

Generally speaking, once a hamster is ready to be weaned they can be sexed and then placed in the appropriate cage. Hamsters can start to procreate at under two months of age, so it’s worth acting as soon as you’ve realized the sexes of your hamsters.

Never, under any circumstances, should the average hamster owner even consider intentionally breeding their hamsters.

Irresponsible or accidental breeding is often the culprit behind physical defects and other issues that can prevent a hamster from living a healthy life. Hamster breeders are educated in all facets of hamster care, including genetics, which is the most critical factor in the breeding process. To avoid the many pitfalls of breeding hamsters, always make sure to sex your pets early and keep the males separated from the females.

Sexing is an Important Part of Hamster Care

This critical step should be taken as early as four weeks of age, when the hamsters can be weaned from their mothers and go into their own enclosures.  Because of how early on these animals can breed, time is absolutely of the essence where this topic is concerned. Don’t put it off, lest you find yourself swarmed by little hamster pups and no idea what to do with them.

What is a Teddy Bear Hamster?

What Kind of Hamster Do I Have?

Do Hamsters Make Noises? (Including The Complete Hamsterese Dictionary!)