Have you ever wondered if hamsters exist in the wild? We know these furry little creatures make excellent pets but before they lived in our homes did hamsters run free in the wild? If you are curious about the question, you’re not alone. We were curious too! We found out some really neat information that we can’t wait to share with you in this article. 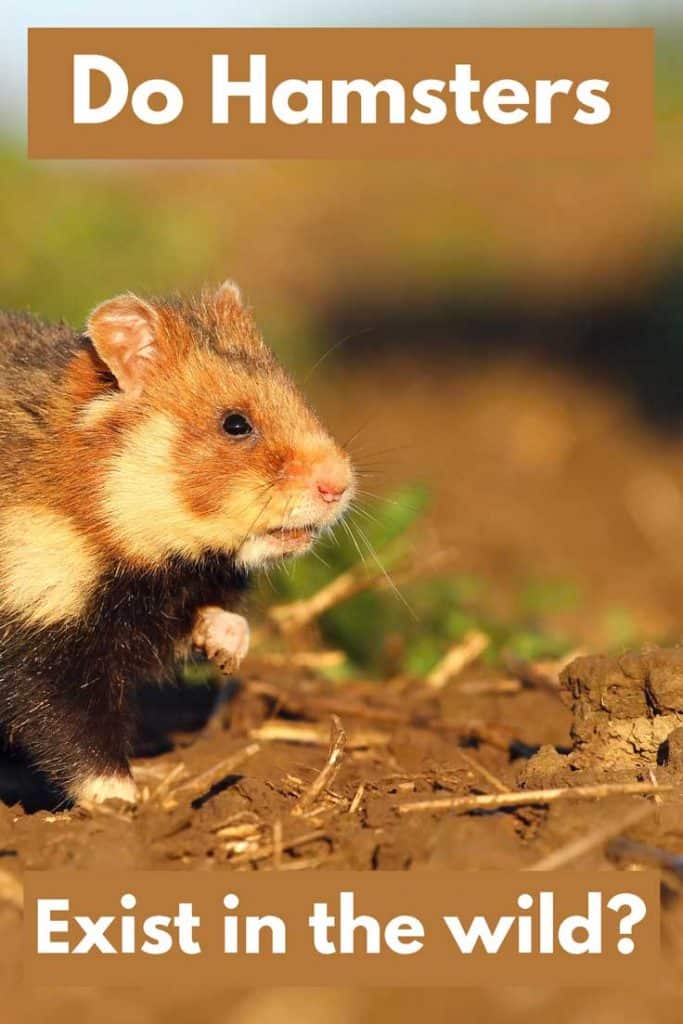 This may come as a surprise to some people, hamsters do exist in the wild! The first hamsters were found in the wild in northern Syria, which makes sense since hamsters prefer dry, warm climates.  Wild hamsters live mainly underground during the day, burrowing until the evening where they will explore and search for food to stow away.

If you want to learn more about your hamster’s history, where their ancestors come from, and how they came to be domestic friends of us humans, this is the article for you! We’ll explore how wild hamsters survive, what hamsters eat in the wild, and determine whether or not your pet hamster could live in the wild (hint – we do not recommend releasing your hamster into a field).

Where did hamsters originate?

Back in 1930, a zoologist named Israel Aharoni was exploring Syria on a quest to find what was initially known as “Mr. Saddlebags” aka the hamster! When he discovered a hamster living in a field, he gathered her and her pups and brought them to Hebrew University in Jerusalem where he worked, to further study them.

While Professor Aharnoi’s intention was merely to study the wild hamsters and explore their tendencies, these hamsters had another plan.  The hamsters who survived the trip quickly bred, as they do. The researchers found that they were relatively tame and easy to make friends with – and thus the pet hamster was born!

There are at least seven genera of hamsters and of those seven, 20 types of hamsters that exist today in various parts of the world including Europe, Asia, and the Middle East. Only five of those species are domesticated and live as pets with us humans. Unfortunately, according to International Union for Conservation of Nature, many wild hamsters are endangered and may require preservation status.

The Eurasian hamster, also known as the Black-bellied hamster, live in Europe, particularly between Serbia and Belgium. Much like their name, they have a black belly and a black chest and are otherwise white and brown. These hamsters are feral should not be tamed. It is often referred to as a farmland pest due to its natural instinct to feast on crops.

The winter white dwarf hamster is often known as the Russian dwarf hamster. Its distinctive ball shape sets it apart from other hamsters that are known to frequent the wild. These hamsters are quite small, half the size of a Syrian.

Despite the name, have a black stripe down their back, however, in the winter, they have been known to turn all white. Russian dwarf hamsters live in the wheat fields of Kazachakastan, Syria, and Mongolia.

The Tibetan dwarf hamster is a sandy colored hamster with dark brown ears. Known in the wild of Tibet, China, India, and Nepal, these hamsters live in mountain regions, prefering high altitude.

The Chinese striped hamster is also known as the striped dwarf hamster. It lives in the wild in northeast China, Mongolia, Serbia, and North Korea. These greyish brown, black, and white striped hamsters are known to live in farmlands but are small enough to sneak into buildings to forage for food.

Sokolov’s dwarf hamsters can be found and China and Mongolia. This grey hamster has a dark brown stripe down it’s back and is known to reside in the wild of the desert.

The Turkish hamster is also known as Brandt’s hamster. These sandy-brown hamsters are native to Turkey and Armenia. Their habitats range, making them very adaptable creatures. They’ll live in sand dunes, rocky mountains, or vast farmlands. These hamsters are expert burrows, sometimes hibernating for as long as four months. These hamsters are at danger for extinction.

Roborovski hamsters are also known as the desert hamster or Robo. They live in the wild of Kazakhstan, Tuva, China, Xinjiang, and Mongolia. These fast hamsters prefer to reside in sandy dunes, and they love to run.

The lama dwarf hamster lives in northern China and makes their home in the mountains. These greyish brown hamsters prefer a varied habitat that consists of mountains, grass, and marshes rather than a sandy, dry climate.

How do wild hamsters survive?

These nocturnal creatures burrow during the day to avoid harsh sunlight and natural predators. They made extensive tunnels to help keep themselves safe. At night, they scurry over dunes, through fields, and forage farmlands for food to eat.

When they locate food, they store it in their cheek pouches and bring back to their burrows. Some hamsters hibernate for extended periods of time to keep themselves safe from the cold therefore it’s essential they stock up on food.

What do wild hamsters eat?

Hamsters are omnivores, which means they survive on a mixed diet in the wild. They eat things like grass, seeds, small insects, and frogs. They will store food in their cheek pouches, and when they aren’t chewing, they will bring food back to their nest to store away for another day. Hamsters hoard food for hibernation or if they’re unable to explore due to weather or natural predators such as larger wild animals.

While some hamsters are known for being solitary creatures (Syrian hamsters), others will hunt together in packs.

Can a pet hamster go in the wild?

You should never release your hamster into the wild. A hamster that is released in the wild will likely suffer from malnutrition and exposure, experiencing a slow and painful death due to this.

While hamsters do enjoy running and play ing they are pets and are not accustomed to living outdoors. Although their ancestors may have lived in the wild at one point after many years of rearing their lineage became domesticated, and they no longer have any instincts for living outdoors.

If you are considering releasing your hamster in the wild because of a need to rehome your pet, we recommend you contact a veterinarian or local shelter. They can help you find a safe home for your hamster.

Read more: Can I Release My Hamster into the Wild?

Can you take a wild hamster home?

While some wild hamsters may seem or be friendly, it’s important to remember they are untamed. Wild hamsters are feral, and humans should not attempt to domesticate them. It would be unnatural to remove a wild hamster from their home, just as it would be cruel to release your pet hamster into the wild.

While wild hamsters are cute, adorable creatures you may want to give treats and take home to cuddle, we recommend you don’t. Your pet hammy will gladly take those snuggles and hamster-friendly treats instead.

Do Hamsters Smell? (And how to stop yours from stinking!)

Why Do Hamsters Put Food in Their Cheeks? (And what you need to know about hamster cheek care)