One of the most common family pets is a hamster, which may leave you asking, what exactly is a hamster? I am happy to help you get to know this cute little animal better. 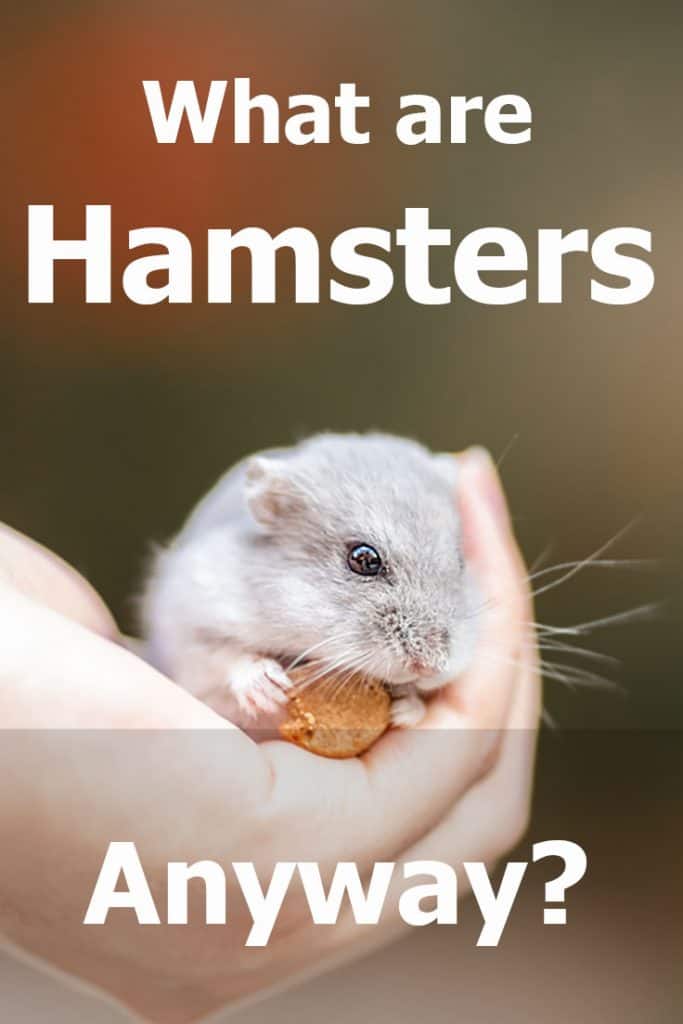 Hamsters are rodents with furry little stocky bodies, small stubby tails, and short furry ears, legs, and wide feet. A few more facts that will help you understand what hamsters are –

Below I explore the variety of species in more detail, as well as how they compare to other small pet options.

There are ten variations of Roborovski hamsters, each primarily determined by the animal’s color:

The Chinese Hamster originates from the deserts of northern China and Mongolia. They are usually longer and thinner and have a longish tail.

Chinese hamsters are brown with a black stripe, with a white belly, and are more mouse-like in appearance. They are considered pests in some states, and require a special permit to own, breed or sell them.

These are also dwarf hamsters and so only grow to 1 -2 oz. in weight, and 3-5 inches long. Chinese hamsters are primarily nocturnal, but are known to be good-natured and don’t usually bite. Since they are so small, they can escape easily and may need to be kept in an aquarium instead of a cage. These cute little critters tend to live about 2-3 years.

Domestication of the Syrian Hamster

This first hamster to be domesticated was the Syrian, or Golden Hamster. In the late 1700’s it was discovered and cataloged by naturalists. The earliest were captured in the 1930’s by scientists who were looking for subjects for medical research.

By that time, Chinese hamsters were already being captured and used for medical studies, but they were difficult to obtain, so Israel Aharoni, a researcher at the Hebrew University of Jerusalem was contacted by parasitologist, Saul Adler for suggestions.

This led to Israel Aharoni’s capture of a nest with a mother and her 11 young. After the mother hamster killed one of the young, and several of them chewed through their box to escape, they were ultimately left with just three, a male and two females.

These three hamsters soon multiplied, and as they were raised in captivity, they were tame and it became apparent that they would make cute and adorable pets, with proper care.

Use of hamsters in laboratories

The use of Syrian hamsters for medical research grew and spread throughout the United Kingdom, and eventually into the United States in the 1940’s.

Albert Marsh established the commercial hamster industry in the United States, and promoted the Syrian hamsters as pets, even taking out advertising. He published a book, called The Hamster Manual.

Marsh was also instrumental in convincing the California Department of Agriculture to classify the Syrian hamster as “normally domesticated animals”. The popularity of the hamster as a pet took off in the early 1950’s and has been well established ever since.

How do hamsters compare to other small house pets?

There are several other popular house pets that are similar to hamsters that a family might consider.

Rabbits vs. hamsters as pets

Rabbits are known to be wonderful house pets. They are clean and good natured and can be litter trained. Like a hamster, a rabbit likes to chew on things, so need to be caged when they are not under direct supervision or during playtime.

Pet rabbits are larger than hamsters. Depending on the breed, rabbits can weigh from three pounds to fifteen pounds. They have a longer lifespan as well, living as long as ten years. Rabbits can be very delicate and easily injured, and usually, do not like to be held or cuddled.

Rats vs. hamsters as pets

Despite their image, domesticated rats can make great pets. Rats are usually larger than hamsters and also less fluffy and cuddly. Their bodies are usually around five to six inches long, with tails the same length as their bodies.

Pet rats are very active at night. These rodents are super smart and require a lot of exercise and attention outside of their cages. Unlike hamsters, they are very social and do best in multiples.

Gerbils are small rodents, about four inches long with a tail the same length. They usually live two to three years and are available in a variety of colors, the most prominent being an agouti color, which is gray, yellow and black striped hairs. They are very social and do best as a same-sex pair, preferably sharing a cage with a sibling. They are not nocturnal, so are livelier for play during the day. They are easy to train and unlikely to bite unless threatened.

Guinea Pigs vs. hamsters as pets

Guinea pigs make another great option. Slightly larger than an average hamster, there are both long and short haired varieties which need to be groomed weekly. Guinea Pigs are known for the distinctive whistling sound that they make, and they are very vocal creatures.

These are social animals and do best with another guinea pig for company. They require a lot of floor space to run and play, so it is important that this is taken into consideration before choosing one (or two) as a pet. They are very easy going and easy to bond with and train.

However, like a rabbit, guinea pigs have a longer lifespan than hamsters, rats and gerbils so are a greater commitment. They can live for five to seven years.

Choosing the Best Pet for Your Family- Think it Through, and Have Fun!

As you can see, there are a lot of great options when it comes to choosing a small family pet. It is important to take your family’s lifestyle as well as the animal’s needs into consideration when making this choice. For example, if you are a large noisy family living in a small space, a hamster might not be for you, as they prefer peace and quiet. Or, if you are certain that you only want to get one animal, then you would not want to get a rat or guinea pig. There is a lot to consider, but adding a new member to the family should also be enjoyable and fun.

Looking for a new pet for your family? This is a very important decision as your new pet will become a valued member of your family.

You want to make sure that you have all of the information on each kind of animal so you find the pet that best suits your family’s lifestyle. From cats and dogs, goldfish and hamsters, there are so many family-friendly options. Hopefully, this post helped you get to know hamsters better so you can make the best decision when choosing your next pet.

Curious about the breeds of hamsters’? You should check out The Ultimate Hamster Breeds Guide, this would help you choose what hamster that will perfectly suit you.

How long do hamsters live?

Do Hamsters Exist in the Wild?

Do Hamsters Get Periods?