Can two hamsters share a habitat without issue? While it’s true that some folks cannot get enough of adorable hamster features and behaviors, there are other considerations to make when you have more than one. Most importantly, perhaps, is the issue of housing hamsters together. We’ve delved deep into the subject to bring you the answers today. 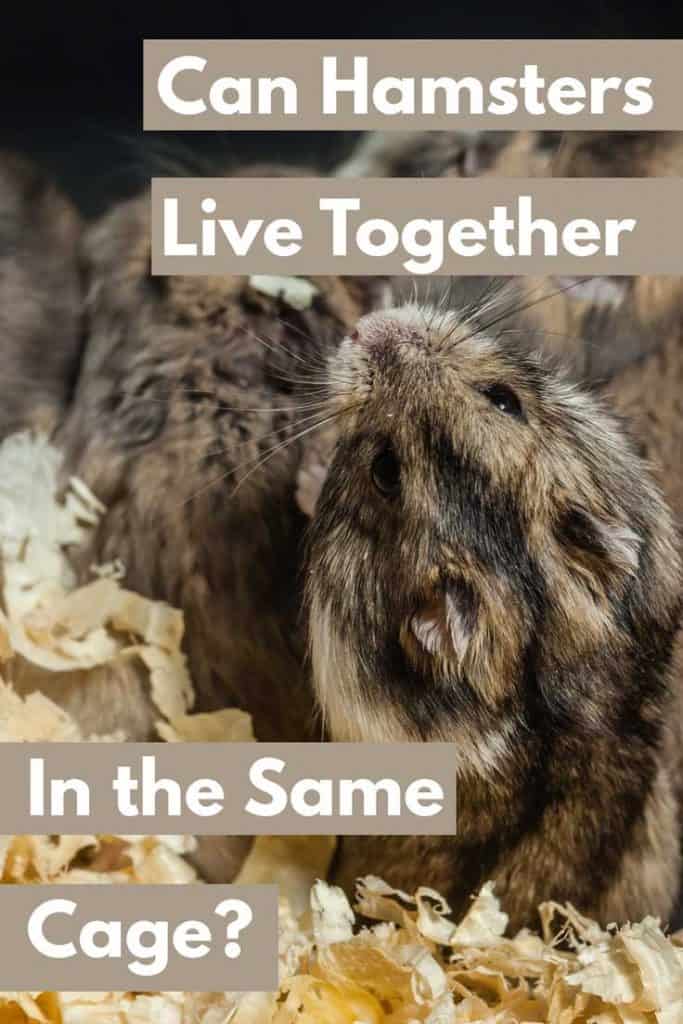 Whether or not a hamster will share his or her space depends a lot on their breed. Syrian hamsters, under no circumstances, should ever be paired up due to their preference for isolation and territorial nature.

When you get into the matter of dwarf hamsters - Campbell’s, Winter White, Roborovski and Chinese Hamsters – however, the answer becomes a more complicated, “Maybe.”

It can be a delicate process to introduce two dwarf hamsters to the same environment. And, of course, each animal has their own personality and preferences that will impact the outcome.

How can you be sure that your hamsters will get along peacefully? How can you change the environment to better accommodate the shared space? Continue reading to learn the ins and outs of hamster cohabitation.

Why Can’t Syrian Hamsters Live Together?

It might be hard to imagine your fluffy, long-haired “teddy bear hamster” being an aggressive creature. Yet, when another hamster – even another Syrian – is brought into their space, things don’t tend to go over very well.

Syrian hamsters, otherwise known as teddy bear hamsters or golden hamsters, prefer to live in isolation. “But why do I see them paired together at the pet store all of the time?” you might ask. The answer to this question is usually: Because they are young.

Prior to five weeks of age, where the Syrian hamster reaches maturity, pups can indeed share a space without violence. It is after this period of time that they should be separated from their siblings and mothers, and then housed alone. The risk of skipping this step includes the possibility of intense fighting – even to the death.

And we said "usually". Sometimes, you see multiple mature Syrian hamsters placed in the same tank at the pet store. Why? Because the pet store owner/manager doesn't know any better. Or they simply don't care.

In the best-case scenario, the result is super-stressed hamsters that can and do get violent with each other. Unfortunately, in many cases, these hamsters fight, and the stronger one will kill the others. The store owner will quietly remove the dead body of the poor little critter in the morning and you'll never see it, of course. But it does happen.

So, don’t worry that your Syrian hamster is lonely by herself or himself. In fact, they greatly prefer it.

As you may now understand, hamsters can certainly be territorial. Regardless of their breed, they all have it in them to be protective of their personal space. It's important to note that hamsters only act territorial toward other hamsters. These pets are almost never aggressive toward their human caretakers when it comes to protecting their territory.

Syrian hamsters are the most territorial breed of hamsters, so don't even try to get them to live together. If Dwarf hamsters grow up together, they'll be completely fine with each other. You can also take careful measures to introduce Dwarf hamsters to each other later in life. Lastly, having a large enough cage helps hamsters feel comfortable in their space. If you have two or more hamsters living together, you definitely need a large enough cage.

Do Some Dwarf Hamsters Live Together Peacefully? 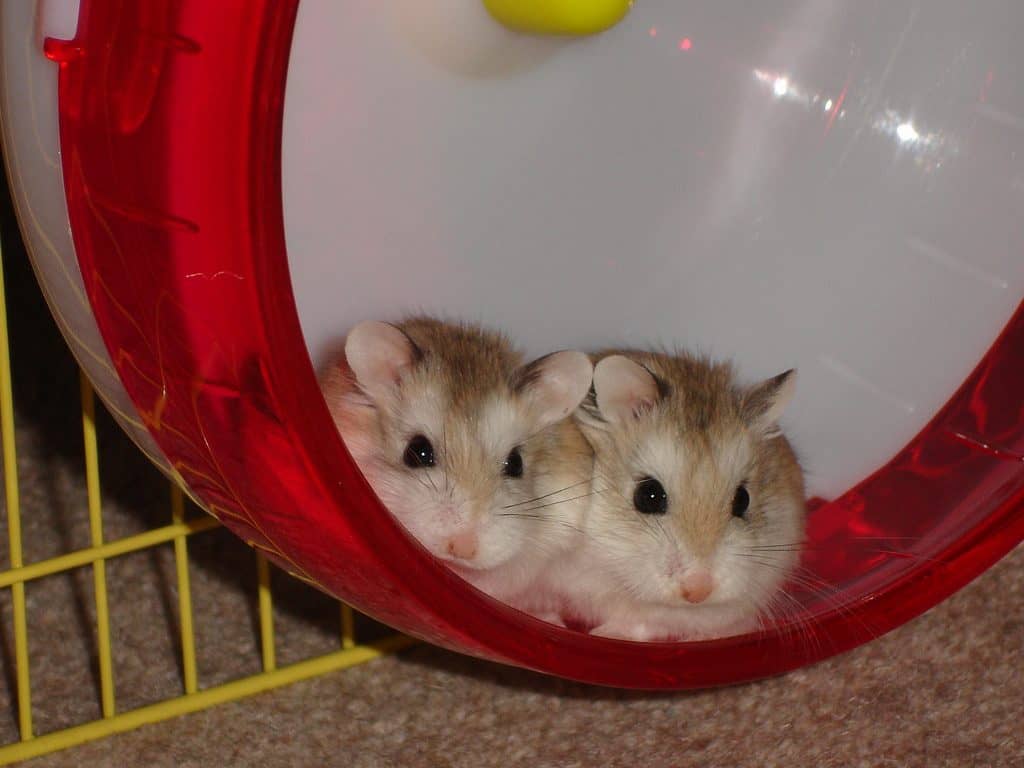 You might be happy to learn that most dwarf hamsters can be paired together in a cage. However, opposite-sex or different-breed pairings should be avoided to minimize the possibility of conflict and to prevent accidental breeding. Before placing two dwarf hamsters in a cage together, consider these guides to help you make an informed choice:

How to Sex Hamsters

What Kind of Hamster do I Have?

Obviously, opposite-sex pairings of the same breed can result in an unintended pregnancy. So, avoid this at all costs.

Breeding any pet is a HUGE responsibility, not to be taken lightly. Don't try to breed hamsters unless -

If you aren’t confident in your ability to determine your hamsters’ sexes, consult the expertise of a veterinarian.

Tips for Creating a Happy Space for Two Dwarf Hamsters

Unfortunately, some dwarf hamsters simply don’t thrive best in pairs. This could be for a number of reasons, including a personality that makes them want to be left alone. For this reason, you should practice caution when introducing two dwarf hamsters to each other.

Ideally, one should attempt to purchase two dwarf hamsters that have already been cohabitating before coming to their new home. This lets new owners know that they already get along and can peacefully share a space.

Sometimes, however, an owner will want to introduce a new partner to their existing hamster’s environment. This can be done but requires great care to ensure it’s done smoothly. You want to make sure that they get along so that they don’t get into brutal fights when you’re not around to break things up.

Continue reading to figure out how to gauge your hamsters’ responses to each other. This information will help you make the safest choice for them.

In order to keep hamsters together, they need to be introduced to their cage together, and while they are still young. Hamsters growing up together are usually less aggressive towards each other. When buying a hamster, make sure you know exactly what type you are getting so you can care for them properly. Hamsters being territorial boils down to what breed they happen to be, their upbringing, and if they have adequate space to live in.

Many hamster owners find it ideal, however, to introduce new hamsters to each other in an area that isn’t marked with the existing hamster’s scent. This means introducing them outside of the cage that your first hamster has been using all this time.

The first hamster might see the newcomer as an intruder, an unfamiliar creature with an unfamiliar scent, and fight it. Now might be a good time to upgrade cages anyway, as the new cage might need to be bigger than your last one and won’t possess an inkling of either hamsters’ scent.

Other suggestions for locations, if a brand-new cage isn’t possible, include:

By taking them both out of their familiar territory and forcing them to meet each other in a brand-new location, they will become distracted by checking out the newness around them.

Putting Both Hamsters in a Shared Cage 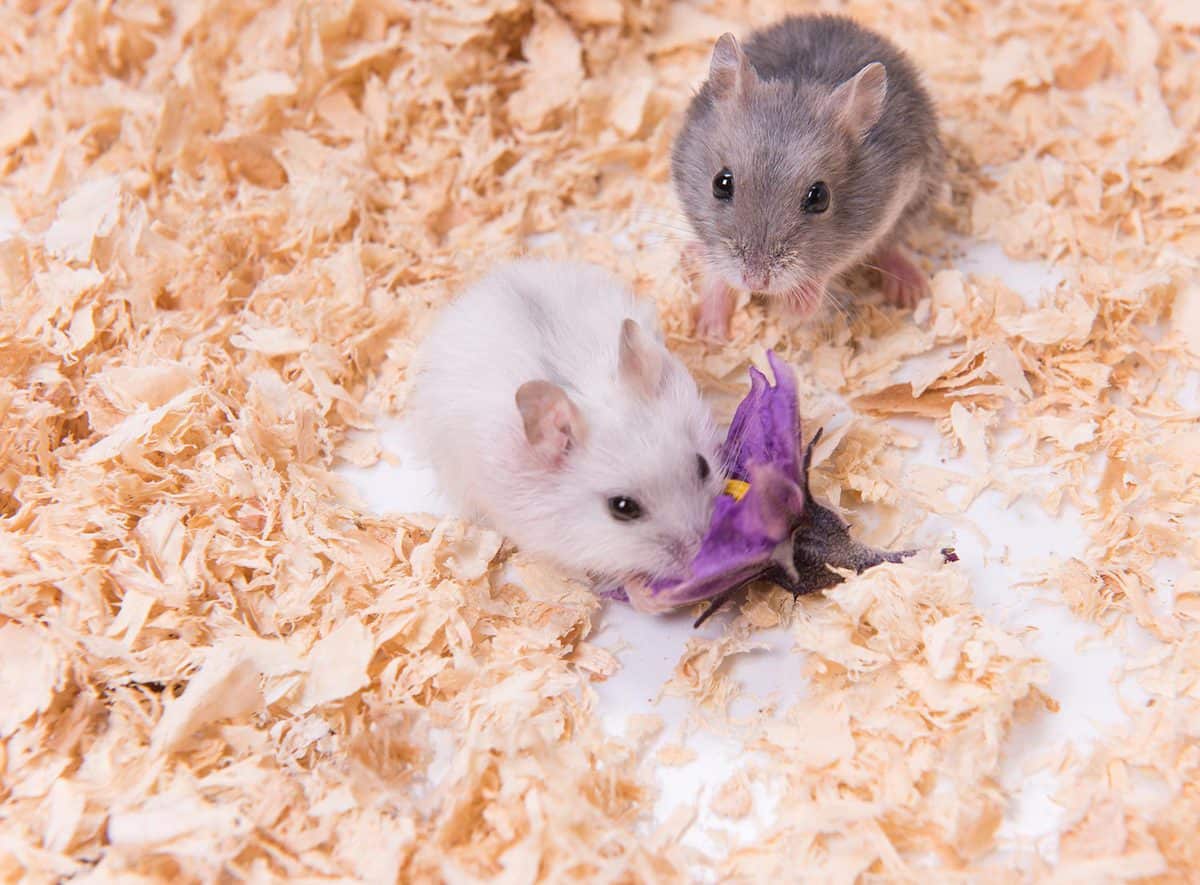 Your first hamster’s scent is going to be all over everything inside of their cage, as well as the cage itself. So, separate the hamsters into safe spots where they can reside during a thorough deep-cleaning of the cage. Clean the cage, including all toys, wheels, dishes and water bottles. Change out the bedding and the litter as well.

Some hamster owners like to put a mesh partition in the cage at first, especially when they know they will be away from home for an extended period. This allows the hamsters to see each other and get acquainted without being able to engage in combat.

You may also choose to simply put them in the freshly-cleaned cage without a partition. If this is your approach, put the new hamster in first. This will cut down on the likelihood of your first hamster becoming aggressive and territorial.

Observe them carefully for the first day that they are together. You may notice some fighting at first, but this doesn’t necessarily mean that the two can’t share a space. Oftentimes, hamsters will fight each other to determine dominance. This fighting could end after a few rows, or it could become an ongoing problem. If fighting persists, they should be separated, and the new hamster given their own space.

It requires time and patience to determine whether your two hamsters will get along in a shared cage. Some fighting at first is normal, but you should do your best to keep an eye on them and stop fights before anybody can get hurt. If you aren’t sure that you’ll have the time and will to do this, you might be better off with one hamster for now.

How To Reduce The Chances Of Fighting

If you do need to separate your hamsters, remember to not put them back together or take them out of their cages at the same time. This will just result in more fighting. If you want to keep more than one hamster in a cage, you can lessen the chance of injury from fighting a few ways.

Design the cage in a way that they cannot be trapped in any corners or dead ends. Provide more than one food bowl. Hamsters will sit in their bowls to eat, and if there is only one it will cause conflict since they don't like to share. Handle them both at the same time and keep the same routine. This will get the same scent on them and can reduce the amount of chasing going on.

Buy young hamsters and allow them to mature together. It allows the hamsters to grow up used to each other and will reduce their fighting instincts. Pairing hamsters based on gender is another good plan. Keeping females together is less risky than males, but mixing genders is the riskiest. You will most likely end up with quite a few baby hamsters this way.

Housing Two Hamsters can be Tricky, so Act with Care 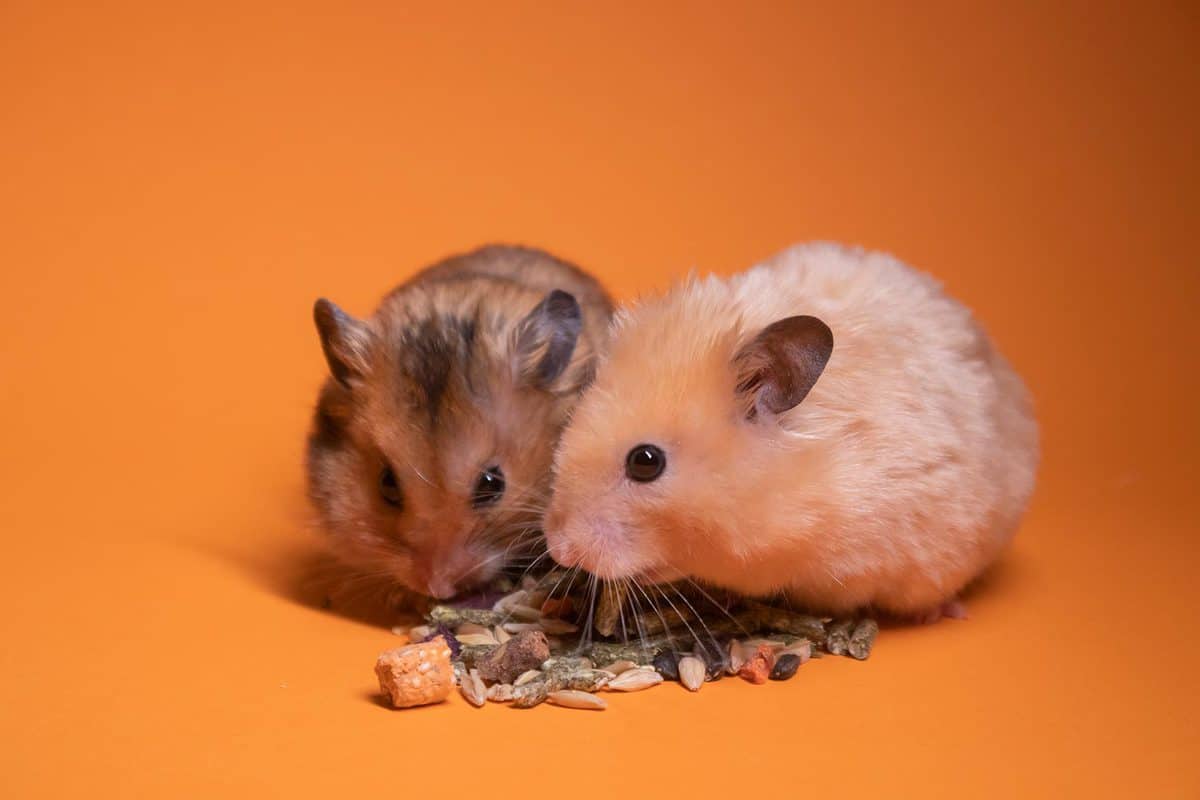 Clearly, two Syrian hamsters sharing a space is a bad idea and should be avoided 100% of the time.

The matter becomes a little less clear where dwarf hamsters are concerned, but it is totally possible to get them peacefully cohabitating.

Owners must be patient and have the time as well as energy to look after their dwarf hamsters during the first days of being introduced. While fighting is normal in the initial acquaintance period, it can become ongoing and lead to the death or injury of one or both hamsters. No hamster is immune to feeling territorial when a newcomer enters their space.

While two dwarf hamsters of the same species are more likely to get along, it is best to have a backup plan, just in case. Make sure to have access to a second cage and all of the accessories on hand in the event that the two simply cannot overcome their fighting impulses.

With the right amount of patience and wariness, you can successfully get two dwarf hamsters to happily share a cage. Just make sure that you have the time on your hands to monitor the situation and ensure the health and happiness of both hammies.

If you're keeping smaller hammies, make sure you read our suggestions for the best dwarf hamster cages around. Looking to learn even more? Check out the 37 hamster care tips that will take you to the next level.

Salutations! I'm Lizzie and will be getting a hamster for mother's day coming up. I'm also hoping to get a pair so they're not lonely or at least have a play mate. As the reading suggest, I'll likely get 2 from the same grouping at the pet store. Syrian choice went out the window, so I need suggestions for the best choice of breed to take home. Also, what size exercise ball would be best for these little guys (no worry, I know two can't be in the same ball, or can they...hmmmmm) Is there a book you'd suggest I can read. I like to know as much as I can before bringing home a furry friend. Thank you so much ****Lizzie