Hamsters are a popular pet thanks to their cute looks and easy care. Originally from the desert regions of Syria, hamsters were domesticated as pets and eventually brought to the United States around 1936. Today there are 24 species of hamsters. Even with this many types, hamsters generally share similar temperaments, care requirements, and behaviors. With that being said, are hamsters territorial? We’ve done the research to bring you the answer.

Depending on the species of hamster, they can be very territorial. Putting the wrong kind of hamsters together will result in them biting and fighting each other. Other types of hamsters are very social and prefer being around other hamsters. However, even these more social breeds can still be territorial!

Hamsters can be a great starter pet! In the rest of the article, we will be addressing some other questions regarding care for hamsters, what types are the most and least friendly, and how to keep them from fighting. If this is interesting to you, we encourage you to continue reading!

As you may now understand, hamsters can certainly be territorial. Regardless of their breed, they all have it in them to be protective of their personal space. It’s important to note that hamsters only act territorial toward other hamsters. These pets are almost never aggressive toward their human caretakers when it comes to protecting their territory.

In order to keep hamsters together, they need to be introduced to their cage together, and while they are still young. Hamsters growing up together are usually less aggressive towards each other. When buying a hamster, make sure you know exactly what type you are getting so you can care for them properly. Hamsters being territorial boils down to what breed they happen to be, their upbringing, and if they have adequate space to live in.

Syrian hamsters are the most territorial breed of hamster, so don’t even try to get them to live together. If Dwarf hamsters grow up together, they’ll be completely fine with each other. You can also take careful measures to introduce Dwarf hamsters to each other later in life. Lastly, having a large enough cage helps hamsters feel comfortable in their space. If you have two or more hamsters living together, you definitely need a large enough cage.

Do Hamsters Get Lonely?

Hamsters will not get lonely. This includes the more sociable breeds, too. The original environment of hamsters is in the desert where resources are scarce, not in cages. In these areas, hamsters are generally solitary animals. Hamsters are biologically suited to be on their own and spread apart from other hamsters. This is one of the reasons why they can be so territorial, it’s just written into them.

Keeping multiple hamsters together is possible, but they will need to be less aggressive breeds and get used to each other from a very young age. You should also be careful about the gender of the hamsters you keep together, even if they are siblings, because you will likely end up with hamster babies if you aren’t careful.

Which Type Of Hamster Is The Friendliest? 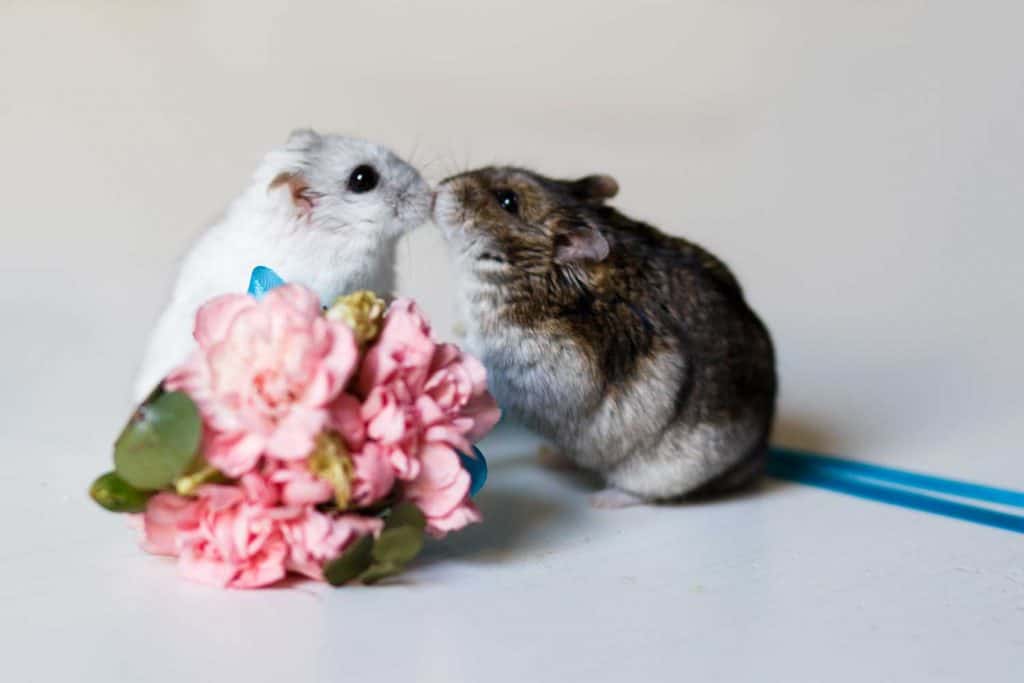 Syrian hamsters are the most common hamster thanks to their fairly large size and how well they connect to their owners. Once they are used to being held, these hamsters will allow their owners to pet them and will even play with their owners.

They are easily the most friendly hamster toward people. However, Syrian hamsters are very territorial towards each other. They don’t like living near any other hamsters and may kill each other if kept together.

Dwarfs, however, are not as friendly towards people. Not that they are aggressive, they simply are too small and too hyper to be held and played with properly. They will inevitably escape your hands and be quite difficult to catch.

As previously stated, there are 24 breeds of hamsters. Each of them has slightly different temperaments, but the larger difference will be in their looks and size. Syrian and Dwarf hamsters are the two that you will most likely come across, but if you are interested in another breed make sure to do your research before buying!

How Do You Stop Hamsters From Fighting? 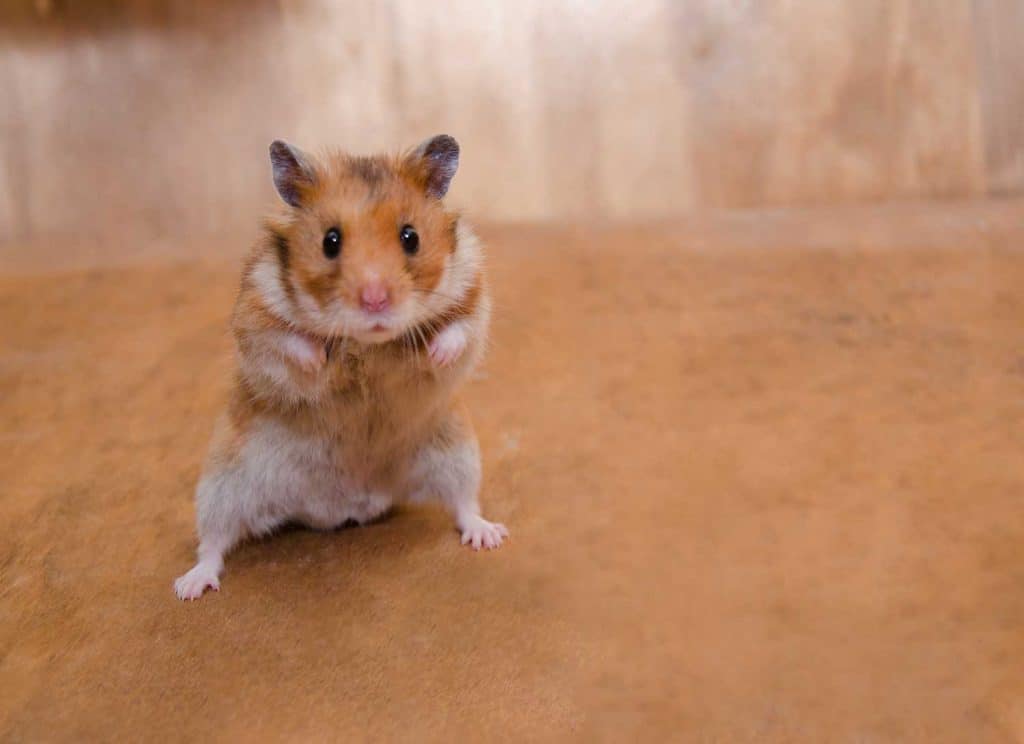 Hamsters are going to fight. However, there is normal fighting and problematic fighting, and telling the difference isn’t too difficult. To completely avoid fighting, the easiest and most obvious way is to separate them. Keeping hamsters in separate enclosures is a good idea if you have more than one.

Make sure to keep their cages clean, and provide toys and activities for them to expend energy in ways other than fighting. Providing separate food bowls or water bottles will also reduce competition between hamsters and can lead to them fighting less often.

Hamsters will also fight if their space requirements are not met. Consider upgrading to a larger cage and including a partition to keep them apart. Keep in mind, hamsters of the same gender fight less often, especially a female pairing. Consult a vet or pet store tech when purchasing hamsters to check their gender if you’re unsure.

It is not unusual for hamsters to have squabbles in their cages. This is usually for dominance. Keep an eye on them and observe. The fighting may just be a contest instead of any true aggression. Normal dominance fighting usually occurs in the first few weeks of them being placed in a cage together.

Normal fighting will involve loud squeaking and the hamsters chasing each other around the cage. One hamster will jump on top of the other, and let it up when it squeaks in submission. While it will be loud and distressing, don’t interfere here. As long as the hamsters get up and continue about their day, it is fine. Similarly, just observe to make sure the dominant hamster lets the other up.

Problematic fighting may start similarly to normal fighting where there is chasing and squeaking. The difference is that there is biting involved and one hamster will corner the other to prevent it from escaping. This is not normal fighting for dominance and is much more likely to cause harm to your pet.

The bullied hamster could be injured, stop playing and eating, or become aggressive towards its owner as well. These are all signs of severe stress, and they will need to be separated.

How To Reduce The Chances Of Fighting

If you do need to separate your hamsters, remember to not put them back together or take them out of their cages at the same time. This will just result in more fighting. If you want to keep more than one hamster in a cage, you can lessen the chance of injury from fighting a few ways.

Design the cage in a way that they cannot be trapped in any corners or dead ends. Provide more than one food bowl. Hamsters will sit in their bowls to eat, and if there is only one it will cause conflict since they don’t like to share. Handle them both at the same time and keep the same routine. This will get the same scent on them and can reduce the amount of chasing going on.

Buy young hamsters and allow them to mature together. It allows the hamsters to grow up used to each other and will reduce their fighting instincts. Pairing hamsters based on gender is another good plan. Keeping females together is less risky than males, but mixing genders is the riskiest. You will most likely end up with quite a few baby hamsters this way.

Hamsters are naturally territorial, even the more friendly and social breeds. You can reduce the amount of fighting between them in quite a few ways. Keep all of these tips in mind when buying hamsters and you’ll be able to provide a proper environment for them!

Before you go, be sure to check out these other great hamster guides:

Can A Hamster Get Along With…

5 Types Of Hamster Cages Every Pet Owner Needs To Know

Why do Hamsters Fight? (And How to Keep Yours From Doing That)

Do Hamsters Burrow? (And What You Need to Do About That)

Why Does My Hamster Hide?