If you have a hamster as a pet, you might be interested in getting it a friend. However, it would help if you kept in mind that hamsters in the wild are normally solitary creatures. They live in the desert where resources are scarce, and so can be fiercely territorial. We’ve researched different breeds of hamsters, and the different behaviors each display, to learn which breeds tend to prefer to be housed with a cage mate.

Syrian hamsters, aka Teddy Bear hamsters, are solitary animals that should never be kept in pairs. It is possible to keep other types of hamsters together; however, they are not necessarily better in pairs than on their own. While some hamsters are social and enjoy being around others of their kind, the same cannot be said of others. Trying to keep a pair or more hamsters together is entirely dependent on a few issues:

While hamsters are usually better off having a cage to themselves, you can house them in pairs. We encourage you to continue reading as we discuss the factors affecting the successful pairing of hamsters. 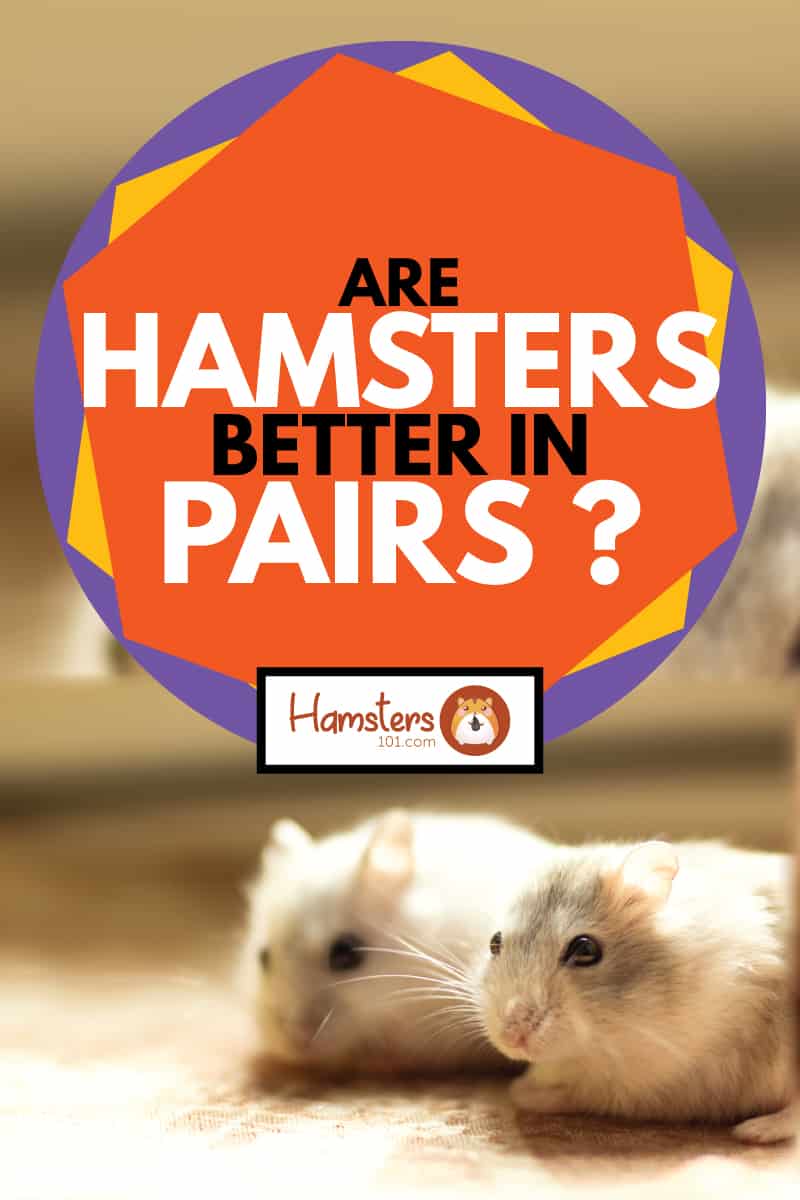 Some hamsters are more social than others. What this means is that certain breeds get along with other hamsters better than others. Regardless of breed, though, some steps will need to be taken to avoid problematic fighting between hamsters housed as a pair. We’ll discuss those tips later on, but first, we will look at two of the most common hamster breeds and their tendencies towards other hamsters in their cage.

The most common type of hamster sold as pets is the Syrian hamster. They are one of the larger species and are generally very friendly towards their owners, even to the point of bonding with them. This friendliness does not extend to other hamsters, though. It isn’t uncommon for Syrian hamsters to fight or even kill their cage mates.

Dwarf hamsters are another popular but much smaller breed. They tend to be much more sociable, even to the point of enjoying being around other dwarf hamsters. Dwarf hamsters are less friendly towards their owners than Syrian hamsters and are harder to hold because of their energy level and size.

When The Hamsters Are Introduced

While hamster breed has a great impact on whether or not hamsters can successfully be kept in pairs or groups, their age is also important. When selecting hamsters, it is incredibly helpful to choose babies, especially if you plan on pairing them.

If hamsters mature together, they are much more likely to get along. This will reduce the likelihood of problematic fighting later on. Remember that hamsters will fight for dominance within the cage regardless, but this is natural and not normally dangerous.

Pairing hamsters can be difficult, but you can attempt to avoid fighting between them in a few ways. Primarily, make sure you have an appropriate cage size. Having a large enough cage for each hamster to have their own territory is important.

Remember, regardless of breed, hamsters are hoarders. They will want to have their own space to nest. This can work for social breeds like dwarf hamsters, but without early introduction or paring the wrong breeds, it may not matter how large of a cage you house the hamsters.

Accessories can be just as important. In a large enough cage, you will have plenty of space to give each hamster its own things. When pairing hamsters, make sure to have two food bowls and two water bottles. Hamsters will likely sit in their bowl to eat, and they don’t like to share. Having two bowls and two bottles ensures the hamsters are not competing over food and can reduce fighting.

Wheels and play accessories can also help here. The hamsters can expend energy by exercising, so they are less likely to fight. Remember that even if you take the precautions, it is still unlikely that pairing certain breeds of hamster will be successful.

What Types Of Hamsters Are The Friendliest?

If you are looking for a sociable hamster to match in a pair, you should consider dwarf hamsters. Of the common breeds, these are easy to take care of and generally friendly with other hamsters. In fact, they are well known for enjoying the company of other hamsters.

Even though they are the most social, when dealing with dwarf hamsters, you should still keep in mind cage size and the age of the hamsters you select. This will have a great impact on whether or not they get along. Also, remember that just because they are related (parent/child or siblings) does not mean they are more or less likely to tolerate each other.

Can a Hamster Die of Loneliness?

Hamsters generally do not get lonely. This includes even more social breeds. Because of their natural environment, hamsters are biologically predisposed to be solitary creatures. Keeping a single hamster in a cage does not cause it to get lonely. In this case, you will be responsible for giving the hamster plenty of interaction to keep it from getting bored.

Hamsters can get depressed if they have had a cage mate for most of their life, and she passes away. They may be less active or have a lower appetite. This is all dependent on whether they were raised living alone or separated, and the hamster’s personality.

It is unlikely that a hamster will die of loneliness. It is more likely that they will simply adapt to living alone, as this is natural for them. However, an individual hamster may be depressed long term after losing their lifelong cage mate.

Female hamsters will most definitely fight. In fact, when it comes to Syrian hamsters, female hamsters are normally more aggressive than males. They will almost always fight and potentially kill any cage mates, so they should never be kept together.

You can keep two female dwarf hamsters together. They are just as likely to fight as males, but fighting can be prevented if you follow our tips.

Will Hamsters Kill Each Other?

Hamsters will fight for several reasons. They fight for dominance, play, and territory. You will need to monitor your hamsters if you keep them together. Hamsters will absolutely kill another hamster in their cage. It is on you to know which kind of behaviors are okay and which aren’t. For more information on hamsters fighting, check out Are Hamsters Territorial? [What Owners Need To Know].

How Big of a Cage Do You Need for Two Dwarf Hamsters?

The minimum cage size you want to aim for regarding dwarf hamsters is 24-inches by 12-inches and at least 12-inches tall. This size is recommended for a single dwarf hamster to have plenty of space to run around. When it comes to hamster cages, bigger is always better. You want them to be able to get away from each other as well. For two dwarf hamsters, aim for at least 700-square-inches of space!

This Petsfit Cage is fantastic for keeping a couple of dwarf hamsters together. This cage has 735-square-inches of space and hideaway areas. Remember to monitor your hamsters to make sure one isn’t being bullied! Click here to see it on Amazon.

This habitat from Mcage is a different fun option. While it doesn’t quite meet the 700-square-inches of space, standing at only 294-square-inches, it is 24-inches tall with plenty of locations for your hamsters to spread out. If you’re looking for a cheaper option, this may be a good fit, but again monitor the hamsters closely and be prepared to separate them if you need to. Click here to see it on Amazon.

When pairing hamsters, be aware of their genders. Even if you pair siblings, a male and female pairing will often result in plenty of hamster babies.

Hamsters are naturally territorial and solitary creatures. Even the social hamsters don’t normally live together in their natural habitat. Hamsters will absolutely fight each other, and while they are no threat to you, they pose a great risk to each other. Real fighting will result in the injury or death of a hamster.

You can do a lot to reduce the stress and territorial behaviors of your hamsters. Minimize areas in the cage that a hamster can corner another to reduce the risk of injury during fights.

If the hamsters do not adapt to living with each other within a couple of weeks, they will need to be separated. Prolonging the length of time you keep the hamsters together leads to increased stress and the likelihood of problematic fighting between hamsters.

Quite simply, hamsters are usually better off with a cage of their own and plenty of interaction with you. It is possible, though, to keep hamsters together in a cage. After reading this article, you should be able to keep some hamsters together and enjoy watching them interact with each other safely.

Check out these inspirational cages, to get prepared to welcome your hamster home:

30 Luxury Hamster Cages and Homes That Will Amaze You

Why Does my Hamster Try to Escape?